Bikes&Lights. Day 5. Lighthouses with the story and a long way home.

Three lighthouses and hundreds of kilometers were waiting for us on the last day! It was a racing against the time: we had to watch a lot, but Estonian border let you cross it exactly on schedule. We couldn’t be late! We said goodbye to comfortable and hospitable Ekesparre Hotel, checked the route, Ohhhh…Ahhhh…WOW-ed about 800 kms separating us from home!!! Honestly speaking, Vasya is the Iron Man. 12 hours drive with yelling girls at the backseats, and shooting but not rest during the stops. We think, the secret is in the coolest co-pilot Vadim. The guy whose mood and positive attitude can barely spoilt by anything in this world. The lighthouses we had to watch that day were very interesting: one is retired, second – with unlucky war background and the last one situated on the lake – the only lake lighthouse in our journey.

The sun was shining, freezing wind decided to give us a break, so the guys went ahead to shoot the lighthouse and surroundings while Mila and Tasha assembled the Bros. And…Regretted it a lot in a moment. The road had been washed away by rains and our little Bros were not prepared for such conditions. While we were trying to cycle through that mud, Tasha was telling Mila the story. How Tasha and Yulia got caught in the Mud in Scotland, so they couldn’t continue the journey. “Let’s be more careful,” – Tasha said. And right after that we got stuck. We a) carried the bikes, b) fought for every inch cycling – basically, made everything that is not usually defined as a pleasant cycling.

When we reached the lighthouse we rushed into the water. It was our bikes’ turn to enjoy SPA. Don’t get stuck in the mud, dear friends! Yes, we were lucky enough to have the sea by our side, but we lost a lot of time on cleaning and time was extremely precious resource that day. At least two in this pic opened the swimming season! What about the lighthouse? Laidunina tuletorn was silently watching us splashing in the waves and may be would laugh at us if it wasn’t so sad. 24 meters tower is useless since 1916 when it was decided to remove its lighting equipment. Why? Because of the nonfunctional location. 100 years alone. However, we weren’t sure it was completely alone. There were pretty much fresh building materials and paints. Looks like someone has chosen a cute place for a summer house. We tried to make up for the missing and rushed to explore the lighthouse. There was a staircase to nowhere inside, and outside – annoyed guys hurrying us up. OKAY-OKAY! Let’s go! The next hero of the day was Virtsu. The first construction was built in 1866. 28 meters high tower was bought in France, assembled in Estonia and detonated by, guess whom? Yes, exactly. By Russian army in 1917. It was the only lighthouse in Estonia detonated during World War I. In 1924 new reinforced concrete lighthouse 19 meters high replaced the temporary wooden tower. In 1944 during World War II it was, guess what? Correct! Detonated! Oops.

In 1951 new lighthouse 18 meters high was built. That was the one we reached. And we swear we left it on its place. We didn’t bring any explosives with us, but we did have cameras, Phantom, gas-jet, delicious and last camp meal, some ruins to climb around and, as always, zero people around. There were only huge white giants in the nearby port. And 4 hours drive to the next lighthouse. And only 6 hours to the border. OOPS What can we say about the car racing we had that day? We met wild swans, sang our favourite songs, laughed at ridiculous Vasya’s playlist which successfully combined RHCHP and Russian pop-songs from the 90s. And then the worst happened. We were late. Super late. We only had 10 minutes to explore the last lighthouse. And we reached it in the deep darkness. Let’s be honest. It is sad.

Rannapungerja lighthouse was built in 1937. It was the only one in our route located on the lake. This is the view which we have to come back to check in the daylight and for now – picture from the Internet. 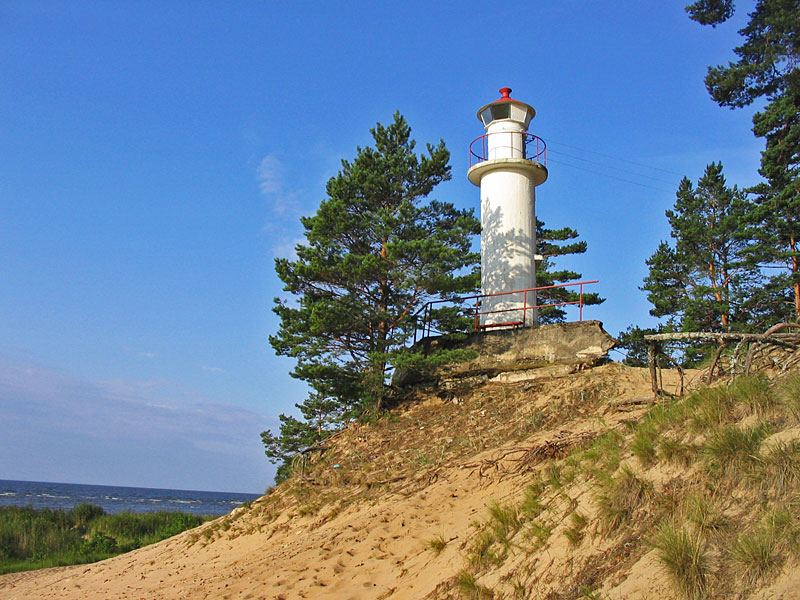 It’s not just a cute lake. Chudskoye lake is a very special place for Saint Petersburg citizens and we hope for Russians in general too. Alexander Nevsky (the guy whose name was given to the main road in Saint Petersburg) beat Swedish army during legendary Battle on the Ice.

Vasya and Vadim were making magic with cameras in complete darkness, waving the lights next to us, shouting at us a bit (only from big love and lack of time, of course). Like blind kittens we found the lighthouse, hugged it, sobbed that couldn’t have spent more time with it and rushed to the border. We were soooo late that even didn’t stop to ask the fox: “What does the fox say?” One more reason to come back!

Estonians are great pals! We crossed the border super fast and exactly on time. And it was very easy to arrange the time of crossing the border online. Well done!

We weren’t that wrong choosing the dates for our trip. Yes, we didn’t have the opportunity to get on the top of all the lighthouses. But it made us appreciate more those few we were able to climb. Especially, when it happened because of nice and kind people we met. Just give it a thought! We hardly met 10 people in 5 days and at least half of them were caring and open people who helped us a lot. Such wonderful statistics! Heading home we passed a long line of buses and cars which were going to Estonia for May holidays. That’s when we knew that with some difficulties like zero ferries and close lighthouses our not season travelling also gave us a chance to have a peaceful journey for the soul.

2 girls, 2 bikes, 2 directors of photography, 1 car, 2000 kms, 10 posted cards from Whale Studio, 60 Bite bars, lots of MBs of Internet traffic from Goodline, 1 dress and skirt from Oh, my!, 2 luxury nights and breakfasts in Ekesparre Butiik Hotel, around ten people on our way, 1 shaggy cow, 2 foxes, couple rabbits, swans, thousands of jokes and hundreds of songs and long hours of peace and calmness one on one with lighthouses and thoughts.

This is our Bikes&Lights adventure. It is hard to believe now it only lasted for 5 days as we experienced so much so it seems like a whole month. And it was so unusual to have completely empty spaces and islands only for you and your friends. It’s not necessary to go to Tibet to find peace and devote some time to yourself. Try exploring Estonian lighthouses not at tourist season. Or it doesn’t have to be lighthouses. Or Estonia. Go to explore the place from your dreams. This can be easier, cheaper and more magical than it seems to you now. Because it is how it really is. In dreams we trust!

P.S. The editing is in process. We will come back to you soon =)